On MCAU we use regions to keep players builds and property protected from all other players. A region by default will allow only the player that created it to build in the area. Regions also protect armour stands, animals from being killed, and access to Chests / Shulker Boxes. Other players (or 'members') can be added to regions, allowing them to build while you (the 'owner') still hold control over the more advanced things such as flags and other permissions.

All players are able to create regions with areas up to 200,000 blocks, using a few simple steps. For a guide in-game, check out /rhelp, which has information on how to region, some advanced commands, and information on how many regions and homes are available to players at each rank.

Note: Region boundaries can change how some game mechanics work. For example, leaves won't grow on trees, or pistons won't push blocks through boundaries. If you need this to happen, overlap the boundary with another of your own regions to get things working properly.

This is a more in depth guide to help you better understand how regioning works. While there are more steps and details here than at /rhelp, the process and end result remain the same.

Step One: Obtaining a Wand

This easy step only involves typing //wand in game, which will give you a Wooden Hoe. This is a handy item to keep on you.

Imagine a region as a cube that surrounds your building area. The two points that tell a region where to exist are the most opposite points of that cube. So say you have a house with a fence surrounding it. Point One will be the lowest point, underneath the corner of your fence. Left Click this block with the Wand to set this point.

Picture of creating Point One 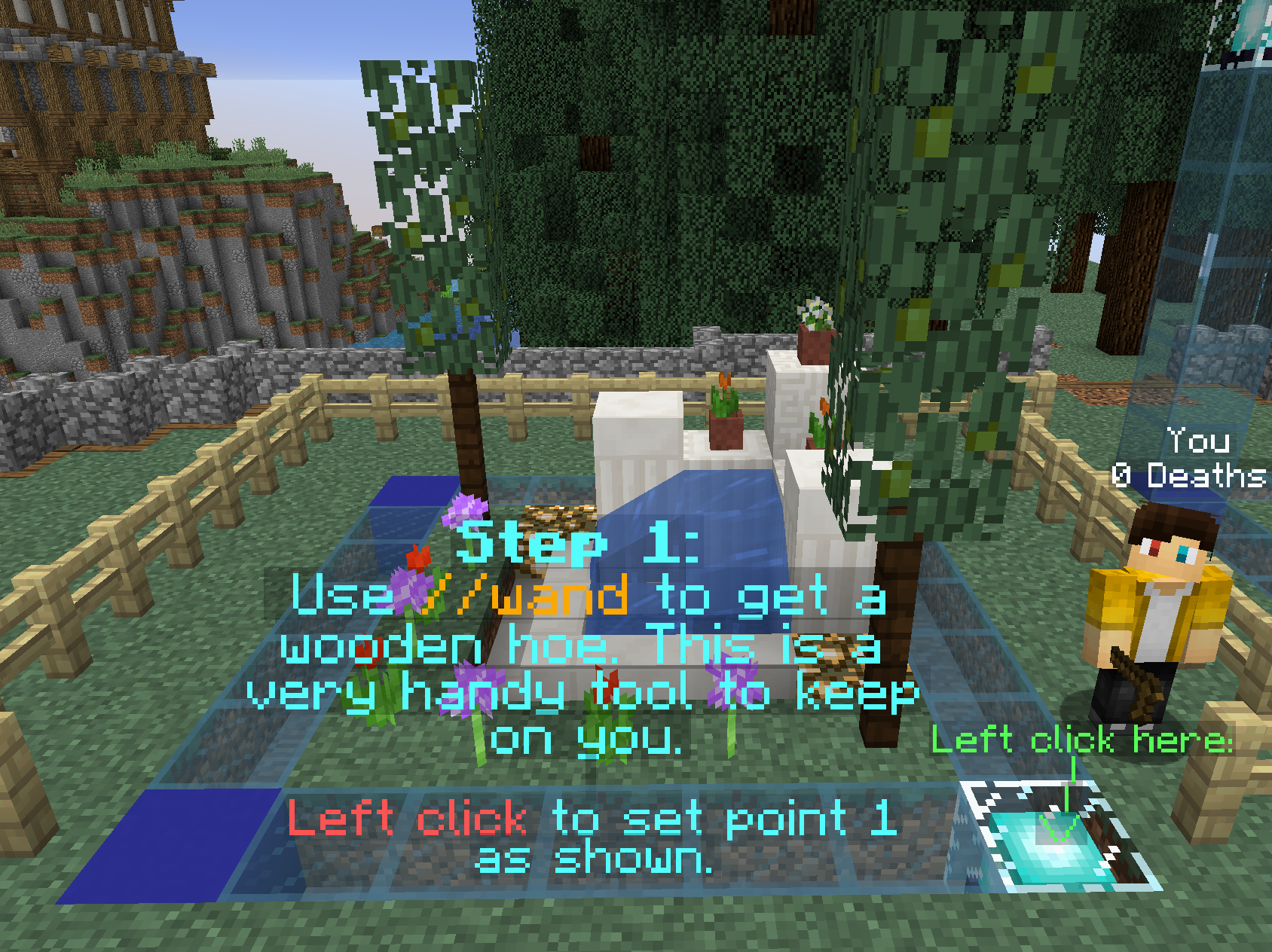 You will get a chat bar notification that the First Position is set, and co-ordinates.

The most common mistake of regioning is thinking that the opposite corner is the other corner of the fence. Whilst this is the opposite corner of a square, it is not of a cube, and so the region will not cover anything above the ground. To cover your whole house, you'll need to select a point in the air.

A natural point may already exist. Otherwise an easy method is to build a dirt tower temporarily to create a point. Once you get high enough to get over any area that you want protected, Right Click the block with the Wand to create Point Two. 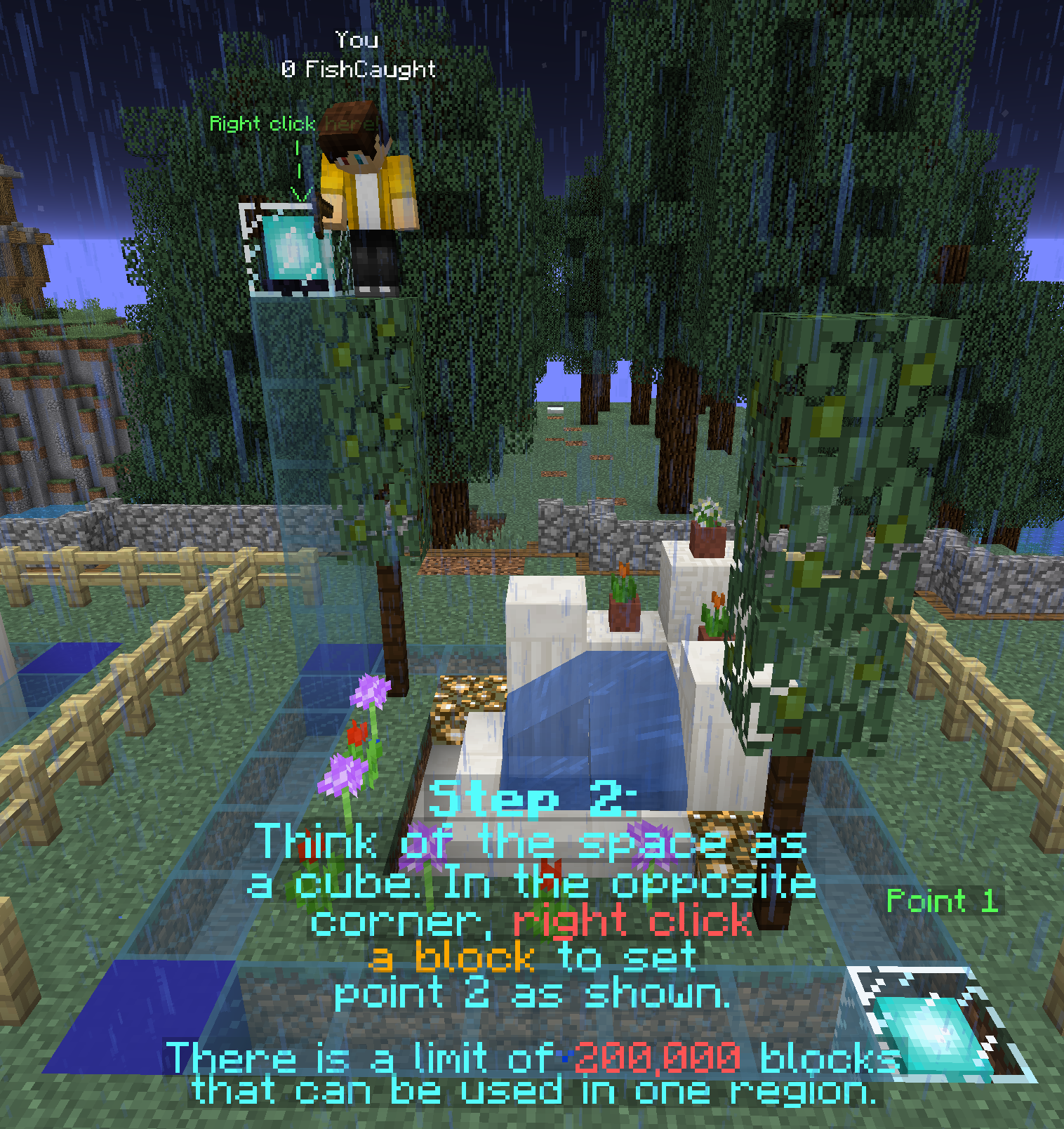 You'll once again get a notification that the Second Point is set with more co-ordinates.

At this point, there are a few things you can do to check your region before claiming it.

There are also examples at /rhelp to show what happens if you set Point Two wrong.

Once you are satisfied that your region covers your build, simply use /rg claim <regionName> to finalise the region. You can do a last check by hitting a block with a Stick, which will inform you of what regions that block is in.

Instead of using a stick, you can also use /rg info <regionName>, which will tell you a lot of information, including the size of the region, who owns it, any members that can build in it, and what Flags are enabled (which are explained below).

At this point, your build should now be safe from Grief, and you can relax!

As the Owner of a region, there is much more that you can do with regions once they exist. Add members to allow them to build, tweak flags to changes settings, or alter the region itself.